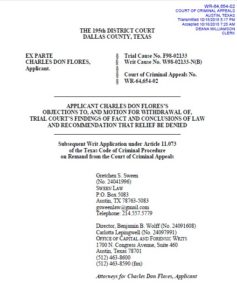 Applicant Charles Flores, by and through counsel, respectfully requests that this Honorable Court:

As Mr. Flores argued to the Court, since his trial in 1999, Texas has made notable strides to try to prevent and unwind wrongful convictions by adopting policies and enacting legislation to improve the reliability of criminal verdicts—including the passage in 2013 of Senate Bill 344, which amended the Code of Criminal Procedure to add article 11.073. 7 EHRR 7-8; see also Ex parte Robbins, 478 S.W.3d 678, 704 (Tex. Crim. App. 2014) (“in 2013, the Texas Legislature also chose accuracy over finality by enacting Article 11.073”). Unfortunately, the Legislature’s intent to make it easier to address wrongful convictions based on outdated science has been thwarted in this proceeding as the Court has abdicated the role of neutral arbiter, ignored the evidentiary record and instead adopted wholesale the State’s error-ridden Proposed FFCL.

The error starts with the very framing of the new-science claim that Mr. Flores alleged (and proved). This case involves a wrongful conviction based on an unreliable eyewitness identification following a highly suggestive, police-conducted, hypnosis session. The Court’s FFCL ignore the fact that the hypnosis session at the heart of his new-science claim is significant only because the hypnotized witness later claimed to be able to identify Mr. Flores as one of two people seen outside of a crime scene. Using new developments in the fields of memory and hypnosis, Mr. Flores demonstrated why, thirteen months after-the-fact, this “eyewitness,” was able to assert with unwarranted confidence that, instead of the white male, with long, wavy hair this witness had described the day of the crime, Mr. Flores, an obese, Hispanic male with very short hair, was one of two men she had glimpsed getting out of a strange car in the pre-dawn hour while she looked through the mini-blinds from a window in the house next door. Mr. Flores also demonstrated, in light of contemporary scientific understanding, why the “science” the State used at trial to convince the fact-finder that the purported identification was reliable is wrong.
As Justice Newell recognized when Mr. Flores’s 11.073 new-science claim was remanded to this Court for consideration on the merits, the forensic hypnosis aspect of this case is inextricably linked to the issue of eyewitness identification more broadly: “As we have noted in Tillman v. State, eyewitness misidentification is the leading cause of wrongful convictions across the country. . . . I cannot imagine that the concerns regarding suggestive eyewitness identification evaporate when eyewitness testimony is enhanced through hypnotism.” Ex parte Flores, WR-64,654-02 (Tex. Crim. App. May 27, 2016 (Newell, J., concurring) (emphasis added).

While state habeas courts are given discretion over the methods for developing and receiving evidence to resolve contested factual claims, see, e.g., TEX. CODE CRIM. PROC. art. 11.071, § 9(a), the fact-finding procedures must be adequate for reaching “reasonably correct results.” Ex parte Davila, 530 S.W.2d 543, 545 (Tex. Crim. App. 1975) (citing Townsend v. Sain, 372 U.S. 293, 316 (1963)).
The Court of Criminal Appeals (CCA), which will ultimately decide this matter following a de novo review, is not bound by the trial court’s FFCL. Ex parte Brandley, 781 S.W.2d 886, 887-88 (Tex. Crim. App. 1989). In deciding whether to defer to a trial court’s findings, the CCA will ask whether the findings are supported by the record, Ex parte Adams, 768 S.W.2d 281, 288 (Tex. Crim. App. 1989). Here, they are not. Nor were the fact-finding procedures “adequate for reaching reasonably correct results” in light of the Court’s decision to ignore most of the evidentiary record. Davila, 530 S.W.2d at 545. Instead, the Court’s FFCL adopt the State’s advocacy positions as “facts” and rely heavily on suspect materials that were never admitted into evidence in this, or any proceeding—after limiting Mr. Flores’s ability to put on evidence relevant to rebut the State’s purported “corroborating evidence” of guilt.

The Court’s manifest errors of law and fact and indefensible omissions are best explained by its decision to adopt, in toto, the State’s Proposed FFCL. This Court should revise its FFCL to remedy several fundamental errors including:

One thought on “Objections to District Court Judge’s Recommendations”